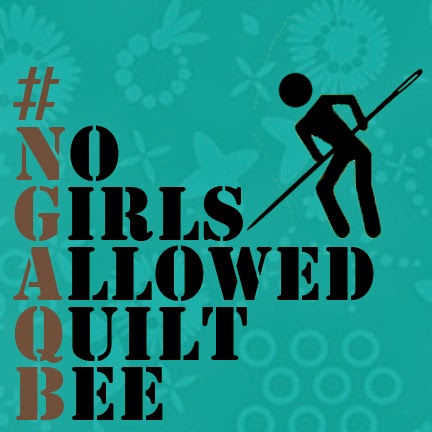 OK, now that it's May I guess I'd better start catching up on posting my #NGAQB blocks! I'll post them by month, beginning with the first month of the bee. Each of the guys in the group has written up a small bio so that, if you're not already familiar with him, you can learn more about another amazing manquilter.

Mr. January is Sandy Greenberg, aka "Curly Boy." Although you might not know Sandy, I'd bet you're familiar with his wife, Brioni Greenberg, who has been mentioned numerous times on this blog. Brioni was one of my fellow Fat Quarterly co-founders and is one of the most talented (and sweetest) quilters I've ever had the pleasure of meeting. I was so excited to see that her husband caught the quilting bug.

Here's some more about Sandy, in his own words:

I’m Sandy Greenberg. I was born in 1969, while men were walking on the moon, in the suburbs of Chicago. Being an only child I was given lots of attention and, since both my parents were teachers, my creativity was encouraged. I studied art in high school, at Illinois State University and finally got my degree from The School of the Art Institute of Chicago. I didn’t do much with it, other than get a job screen printing t-shirts. The creative bug was pretty much burned out of me.

Fast forward a decade or two and after a pretty serious work accident (I sliced open my wrist cutting nine of twenty-two tendons, one of three nerves and one of the arteries) I met a lovely Yorkshire lass online. Days and sparks flew and I moved to Leeds, UK and got married in 2002. We have a lovely 4 year old boy who has been with us for 2 ½ years now. We also have three cats called Jimmy (13 ½), Maggie (5) and Norman Price (14 weeks). I like reading and watching Science Fiction, watching motor sports, travelling, and having fun with my boy.

I am married to the super talented Brioni Greenberg, aka Flossyblossy. She’s been a quilter for about 6 years. She is one of the founders of Fat Quarterly eZine and is co-author of FQ’s first book (the second is on its way). She also had her first solo book come out this summer, 25 Ways to Sew Jelly Rolls, Layer Cakes and Charm Packs. Having this influence in the house, and being constantly surrounded by fabric and projects it was pretty hard not to take an interest.

I approach quilting as a technical challenge.  I am less bothered by the outcome and am more interested in the process.  I LOVE paper foundation piecing! I have no interest or love of fabric however. I pay no attention to lines or designers, just pretty colours and patterns. I’m a fearless skilled amateur. My second ever project was a pattern of curved flying geese of my own design and everyone thought I was brave and crazy. I just did it because no one told me that I couldn’t.

I’m probably a modern quilter, I don’t really know. I tend to like uber-complicated patterns with small pieces and bright rainbow palettes. I chose the Lone Starburst block because I love it, but didn’t fancy making enough for a whole quilt. You can find tutorials here:

Sandy requested two Lone Starburst blocks from each of us in the bee, one with a light background and one with a dark background. Here's what I came up with: 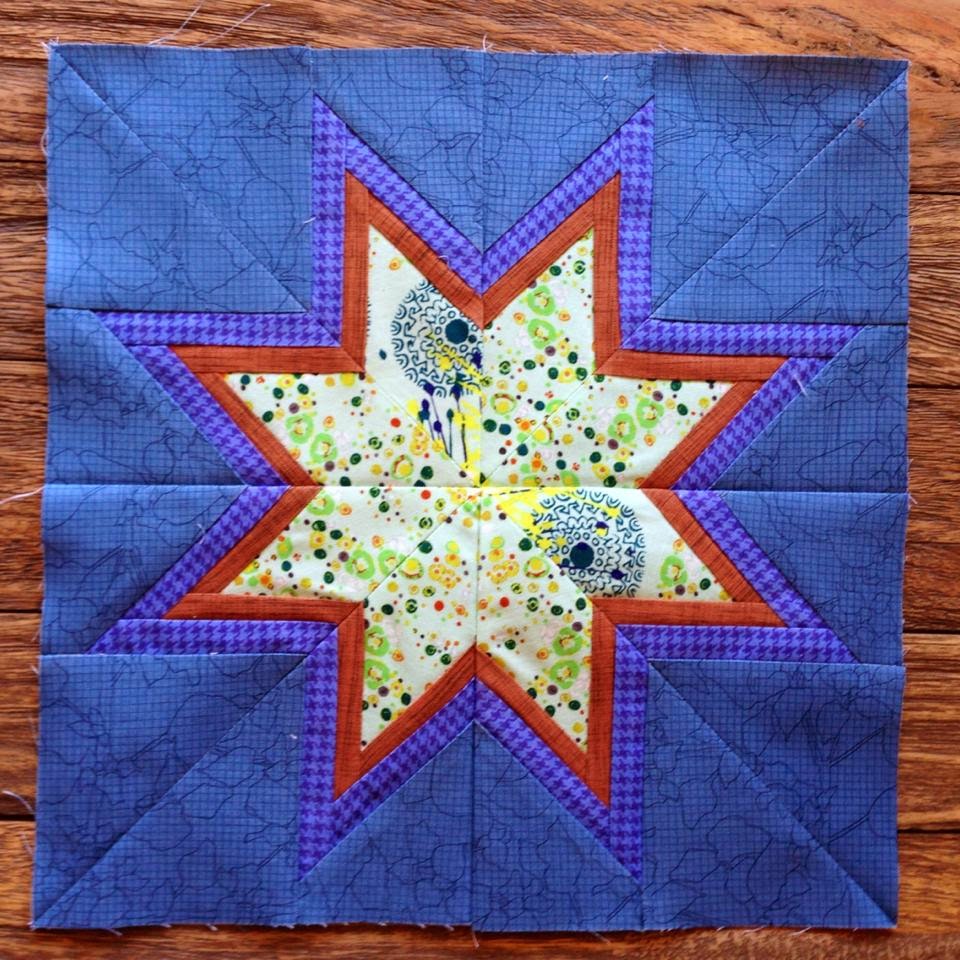 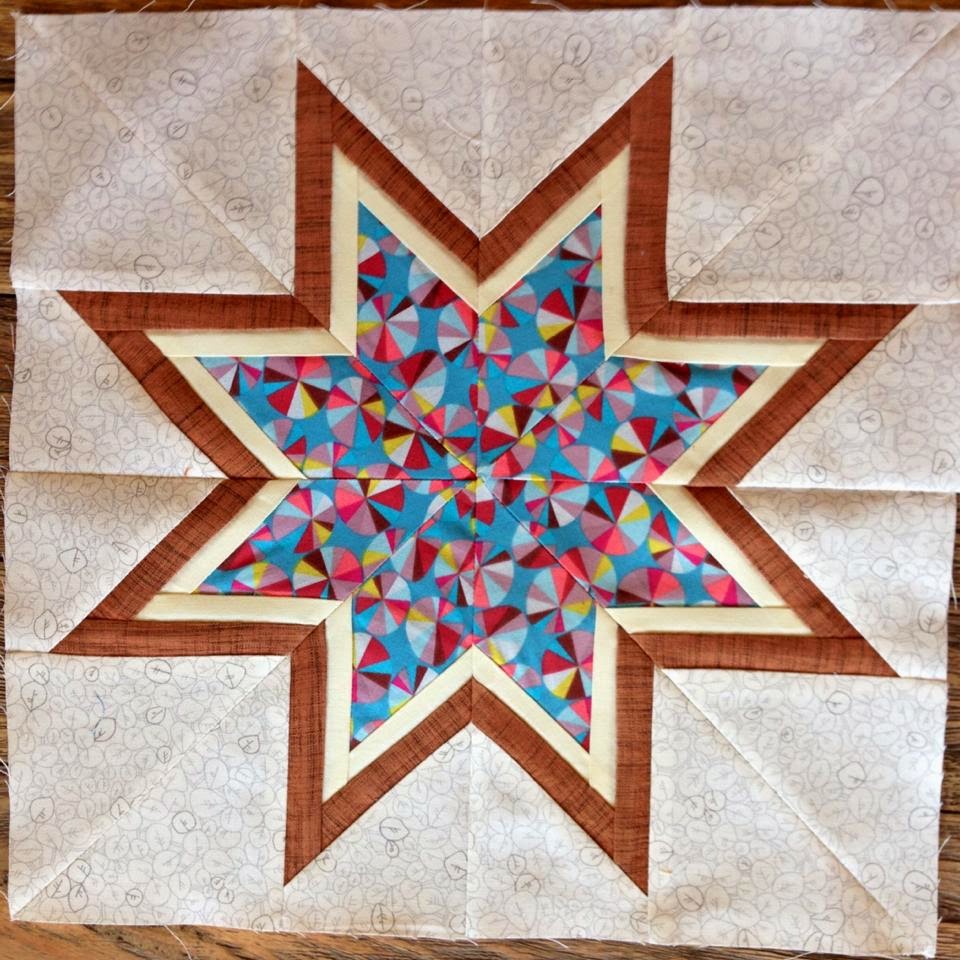 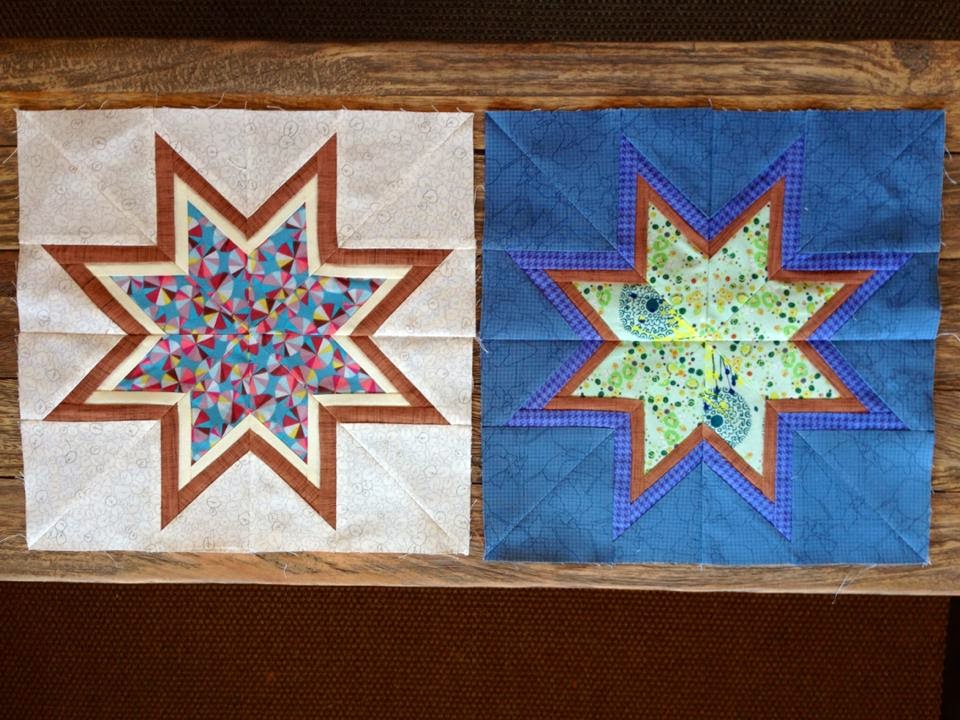 Although paper piecing is not really my forte, I still had a lot of fun selecting fabric combinations and putting these blocks together for Sandy. Thanks for the challenge, my friend!