Happy day-after-Easter! I hope you all had a nice weekend. The weather was beautiful here in NC -- and it's supposed to reach 90 degrees tomorrow!

I was busy, busy, busy this past weekend (thanks in no small part to my mom being in town, aka built-in babysitter). Three fairly sizable projects are thisclose to being completed, another Hoop Up embroidery piece done, and two quilting bee blocks started last night (and expected to be finished tonight). The mojo definitely feels like it's in high gear -- even if it is still just catching up on past due deadlines!

While I have a quick moment, I thought it was a good day to catch up on blogging about the past few months' worth of quilting bee blocks. But before I do, I wanted to let you know about a new site that Erin recently set up called QuiltingBeeBlocks.com. Ever wonder about the ins & outs of virtual quilting bees? Want to join one, or start your own? Looking for inspiration for the bees that you're already a member of? Well, check out this fun & informative site that's an offshoot of Erin's already-popular Flickr group.

First, some news from my corner of the VQB world. My original quilting bee, SewConnected, has come to an end. December was our last month, and the final few blocks are making their way home to their rightful owners. SewConnected was my first (and, in many ways, my favorite) bee and all of the members were amazing, so it's somewhat sad to see it come to an end. I'm still on the fence about another round for the group -- I know many of the people feel as overcommitted as I do right now, but who knows what the future will hold? I am going to keep the group on hiatus for right now, and revisit it in a few months' time.

Another of the bees I had been participating in, the Cottage Quilting Bee, has also recently wrapped up.

We're also nearing the finish line over in SewConnected 2. January was Beth's month and she managed to send out her fabrics just before giving birth to her new baby daughter, Abbie! I made her this fairly simple block because I really wanted to showcase all of the different prints that Beth had selected: February was Doris' month. Doris wanted to make a neighborhood quilt with all sorts of houses. She was especially interested in house blocks more simple in form and a little bit wonky. Doris sent along some greens for the landscape and I dipped into my scrap bin for the rest. Over in SewConnected 3 (January), Gretchen sent us all black fabric + two additional solids. Her request was for more traditional, Amish-style blocks. I picked this pinwheel-style block from Quiltmaker's "100 Designer Blocks" magazine from a few months back. I really love how it turned out. I think Gretchen's quilt will be a stunner. We unfortunately had a bee member that had to drop out of the swap, so as the group's leader I volunteered to make some replacements for those still waiting for their blocks. I made this additional block for Gretchen on her behalf: I also made a replacement block for Cathy, whose month was a few months back. Both this pattern and the last are also from the "100 Designer Blocks" magazine -- certainly getting my money's worth! Although I am actively trying to reduce the number of swaps I am in, I did recently sign up for a second year of Kimmie's Buzz Cuts bee. It's such a great group of very talented quilters that I just couldn't resist. Plus, everyone there is so nice!

January was Lish's month and she sent a stunning selection from Moda's Soiree line. I received fabrics from the blue colorway and made three 9" blocks for Lish. First, a paper-pieced Lantern Light block from Quilter's Cache. (LOVE this one!!) Here's one that I kind of made up on my own: And finally, a block from one of Judy Hopkins' quilt block books (can't remember the block name right now): February was fellow Triangle Modern Quilt Guild member Rachel's month. She pretty much said "anything goes" (LOVE that!) and even welcomed rectangular blocks. I went all improv on this one and ended up with kind of a mini patchwork quilt with some wonky rail fence blocks in it. (Pic is from Rachel's photostream, since I didn't get a pic before giving it to her in person at our guild meeting!) 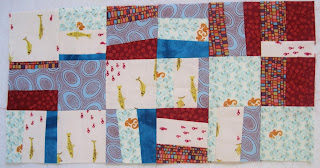 Kerri was up first in January and wanted to make a mini gnome village in shades of red & aqua. I had tons o' fun making these blocks. I love making mini houses and stuff, and tried to do something new & original for Kerri. First I made little twin cottages -- maybe for two best friends who build their homes right next to one another? Or two married gnomes whose trick for a happy marriage is separate sleeping quarters? : ) Next up is a much simpler little gnome home: I was on such a roll that I was able to begin a third block (though I didn't have enough white fabric to finish it up). I thought the village could use a nice big tree ... and look! Little Red is strolling underneath. February was actually my month in {Bee} Imaginative and I have received some AMAZING blocks. I just got my last ones, so I will post them separately once I am able to get some good photos.

Last (but not least) is Rachel's bee inspired, which is actually also wrapping up in March. January was Natalie's month and she, too, requested mini houses. She sent a fun selection of prints that made me feel like I was designing the world's cutest little candy shop: February was a two-fer month, with both Lynn & Deb up to bat. Deb sent along a really eye-catching collection of prints and wanted simple square/rectangle-type blocks. I went back to an old favorite layout and added in the coordinating aqua & orange birds. Great selections, Deb -- I LOVE how this all looks together!

And finally, Lynn forced me to finally confront my fear of paper-pieced spiderweb blocks (which I had been avoiding like the plague). I am so glad she did! They weren't nearly as hard to make as I had been expecting them to be. Don't you just LOVE all of that Lizzy House goodness in there? The rings of dots are amaing, the geese totally make me smile, and the medals & ribbons on the green background is quickly becoming a favorite print of mine. Another quilt that I can't wait to see completed!!

Finishing up my March blocks this week ... how apropos for the first week of April, huh? Yes, I'm still lagging just a bit behind. How are the rest of you doing out there in quilting bee land?
Posted by John at 1:59 PM