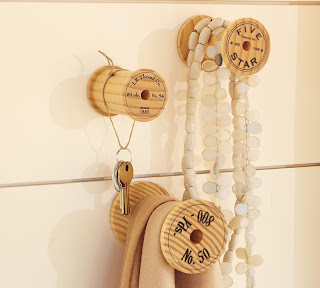 Quilting Along with Rachel @ p.s. i quilt

In my spare time (ha!) I've been trying to play catch-up with Rachel's pinwheel sampler quilt along that's she's hosting on her blog, p.s. i quilt. I decided to take this opportunity to make quilts for my twin daughters. Ever notice that, as quilters, we are always making things for others but rarely for ourselves or the people in our own families?

Though I tend to favor modern fabrics, I always love the vintage charm of the Fig Tree Quilts lines for Moda. I thought these would be perfect for my little girls' room, especially as we prepare to move to a new home.

For twin #1, I am using Patisserie: And it's Dandelion Girl for twin #2: I also LOVE the fact that Moda makes its Bella solids line in some Fig Tree-specific colors for easy coordination. I got mine at the Fat Quarter Shop.

I love how they're coming together so far, and I hope to be able to catch up soon.

We're looking forward to sunny days with temperatures in the 80's here in NC this weekend ... should make for a beautiful holiday weekend. Anyone have any fun plans?
Posted by John at 11:46 AM 14 comments: 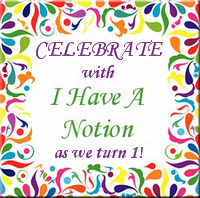 We all love a good giveaway, don't we? It's one of the more exciting parts about this whole blog business. Sure, it's fun to win a bit of fabric here and there, but if you really enjoy giveaways you MUST go visit Kelly at I Have a Notion.

To celebrate her site's 1st birthday, she's hosting the mother of all giveaways -- "30 Days of Giveaways".

And it's not just trinkets, people.

Just this week, Kelly listed an iron valued at $200. Wow. I sure could use that one.

The good news is that the deadline for all 30 prizes isn't until April 15th, so you're not too late to throw your hat in the ring for any of them. So what are you waiting for? Head on over to I Have a Notion and get your giveaway on. Tell Kelly that Quilt Dad sent ya'!
Posted by John at 10:26 AM 7 comments:

Email ThisBlogThis!Share to TwitterShare to FacebookShare to Pinterest
Labels: giveaways

The second round of Heather & Kerri's Pillow Talk Swap is currently wrapping up, and it's quickly becoming one of my favorite swaps on Flickr. Mini quilts are great, but pillows are just so functional and have already added so much to the decor of my home!

For the second time in a row, I was the luckiest swapper in the group ... well, according to me, anyway! Here's a shot of the pillow I received from the hostess herself, Heather: Isn't it amazing? I had been watching Heather post the steps of the cathedral windows tutorial that she developed while making this pillow, and had admired it from afar. I mean, solid gray? Flora & Fauna? It's SO me.
And then when I realized it was her swap pillow, I wanted it. Like, really, really wanted it. And the weirdest thing? I kind of had a feeling all along that it was coming to me.

Here it is alongside my original Pillow Talk Swap pillow, made by Amanda. It's all coming together nicely, eh?

And here's the pillow that I made for my partner, Amber of One Shabby Chick: When I first signed up for the swap, I happened to be shopping at my local quilt shop (Wish Upon a Quilt) and they had a sample made up of this exact pillow. It's from Anna Maria Horner's book, Seams to Me. The pattern itself, with it's ruffled take on patchwork, really appealed to me ... but moreso, I couldn't get over how crazy soft it was! I was captivated by the pillow and knew I had to make one.

I appreciated being able to try a new technique, since I had never done anything with ruffles before. And I made my own custom insert, since the pillow was not a standard size. I splurged a bit and bought bamboo filling from JoAnn, and I am so glad I did -- it helped my pillow to be as super soft as the one I saw at the shop!

This pillow is now safely at home in Hawaii. I hope you enjoy it, Amber!

What do these beauties all have in common? They were all plucked from the Modify Tradition blog! Have you heard about the Modify Tradition project? It's the brainchild of Jennifer & Crystal, who embrace the most traditional block patterns and transform them by using bright and modern fabrics. The effects (as you can see) are stunning.
Did you know that Modify Tradition also hosts quilt-alongs? They recently started their second quilt-along, and I am sure it's not too late to catch up. This post should help you get started ...
Much to my own chagrin, I haven't been able to take part in this quilt-along. However, the awesome Modify Tradition blog and Flickr pool are two of my favorite sources for inspiration & eye candy. So head on over and tell the ladies that Quilt Dad says hello!
Posted by John at 6:00 AM 14 comments:

"Off the Grid" Sightings

I've been so delighted to see some people's interpretations of my "Off the Grid" Sliced Nine Patch pattern that was posted on the Moda Bake Shop last month.


Flickr user Mel Sews recently posted this completed quilt. She also used the "Wonderland" line (like my original) but substituted the honey bun strips with a solid brown linen. I love the different look that it gives to the quilt! 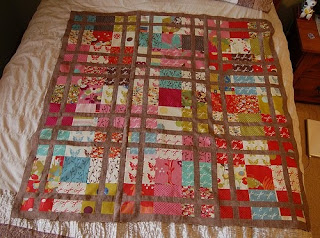 Lynne from Quilts and Cats recently completed this stunning version made from the "Tranquility" line by Sandy Gervais. Lynne's using hers as a wallhanging. Hmmmm, a great idea as I think about how we'll decorate our next home ... 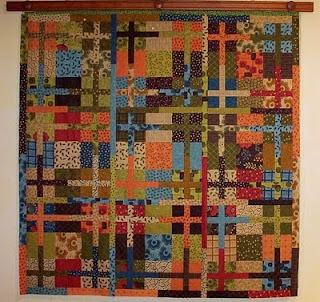 Poor Jess (aka hectichousehold) recently broke her arm, and do you know what she did to soothe her pain? She hit her scrap bin and made a quilt block based on my pattern! She even improvised a bit and added a few more slices. Check it out: 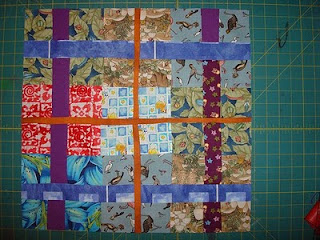 I absolutely love seeing what you've all done with my pattern. And I have to admit that I am glad (and relieved!) that you've all said such nice things about the tutorial. I'm still fairly new at this, so the feedback is awesome ... and I'm so glad that you're enjoying it!

If you make an "off the grid" quilt, I sure would love to see it!

Please excuse me whilst I brush all the cobwebs off of my blog and dust the shelves a bit. Wow, it's been a while, huh? Unfortunately, it's already past my bedtime so I can't chat long, but I wanted to let y'all know I'm still here. And I have a LOT of catching up to do and things to share ...

In the meantime, I thought I'd share another Kindle holder that I made for certain little ginger monkey ... just because she got a Kindle and I knew she'd want to carry it in style. And because she's super cool and I knew she'd appreciate & enjoy it. Plus, I finally got to cut into my Lush stash. LOVE it. And here's a fabric-covered Moleskine that I threw in for good measure: