Whew!  Another jam-packed weekend gone by waaaaaay too quickly.  I hope yours was a good one!  Before moving on to my crafty updates, some news: sadly, the Frogs suffered a devastating 5-0 defeat in their season opener.  But since they don't keep score, I guess that doesn't matter!  Still, aren't they the two cutest frogs you've ever seen?: 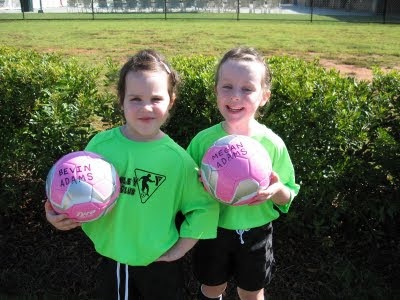 While Mrs. Quilt Dad was performing her Assistant Coach-y duties, the little one and I explored the soccer fields.  Here's the little bugger when I tried to take his picture: 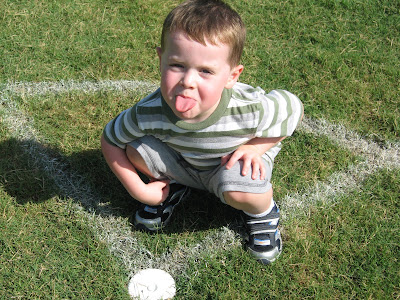 What can I say?  The little guy takes after his dad!

A few posts ago, I mentioned that I was dabbling a bit in embroidery.  Here's some progress that I've made on the piece I showed last time: 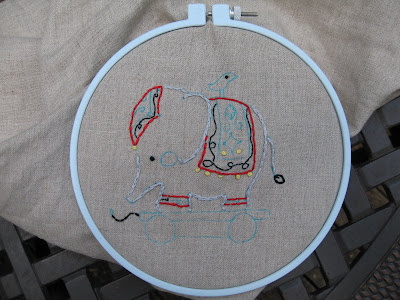 I've been so excited about working on this stuff that I actually went ahead and joined an embroidery swap!  (For those of you who read my blog, that's really no surprise, is it??  : )  Yes, it seems that the bug has bitten.  It's called the Tea Towel Tour and it's hosted over on Craftster.  I first learned about this swap from my crafty pal Rita, and I was excited to hear that another round was opening up.
The premise is simple ... everyone in the swap is placed into groups of 6.  A small towel (or napkin, or apron, or pillowcase, or whatever) travels from swapper to swapper, collecting a small embroidered design at each stop along the way.
Here's my piece.  I started it with a small picture of an octopus, and then bound it with one of my favorite Flea Market Fancy prints.  The cloth napkin is a really soft sage green and the pattern is by Andrea Zuill, who writes the awesome Badbird blog. I've asked my fellow swappers to stick to an oceanic / underwater theme.  I'm so excited to see what they come up with! If you want to follow along with the action or check out the work from the prior tours, visit us in the Flickr group. I'm a researcher by nature, so when I want to learn something new I tend to read as much about it as possible.  I had some leftover gift card balance at Amazon, so I ordered a couple of books to give me some tips and inspiration: 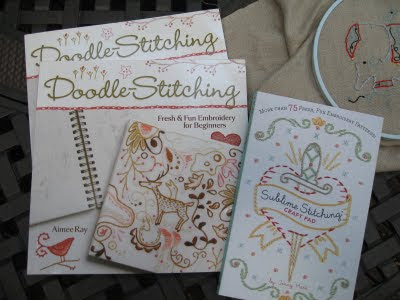 Wait!  What's that?  It looks like I accidentally added 2 of the "Doodle Stitching" books to my cart!  Rather than sending it back to Amazon, I took it as a sign that it was time for a giveaway.
So, if you are a quilter that's been itching to try your hand at embroidery (like I was) and think this great book would give you the inspiration you need to get started, leave me a comment and you'll be entered to win!  Just tell me how you'd like to use your new embroidery skills, or what kind of project you think you'd like to make.  I'll even throw some extra goodies in with the book. 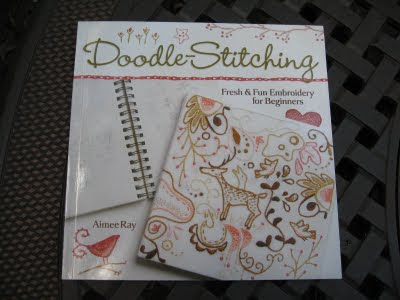 I'll pick a winner (via the Random Number Generator) on Thursday, September 3rd.  Good luck, and spread the word!!
Posted by John at 8:08 PM