Thanks for sticking with me, folks! I know I'm way behind on my blogging -- I've got 2 or 3 blog posts already started and in draft mode, and another 2 or 3 in my head -- so I am going to try my best to catch up.

First, let me thank you all for all of the glorious Tar Heel support. Sorry 'bout that loss, Kate ; )

Also, I appreciate all of the nice feedback I received regarding my embarrassment over the Quilt Arts fiasco. I was happy to hear that so many of you received at least part of your orders, even though I didn't receive a single thing. So if any of you want to throw a fat quarter or two my way ... you know, as a kind of finder's fee ... ... ... JUST KIDDING!! : )

Let me share with you a block I made a couple of weeks back for the Cottage Quilting Bee. Viv sent out a selection of black, white and red fabrics with an unusual request: create a quilt block in the spirit of a fictional character named Emily the Strange. I had never heard of Emily before, but Viv and her daughter are big fans and wanted a quilt in her honor.

The cool thing about Viv's request?? -- anything goes! Viv was up for any type of funky, out there block design and OK'd things like embroidery, applique, etc. I think her vision was to have a kind of large, usable art quilt. So I've said before that I like these groups because I can stretch myself, and boy did I ... ... ... 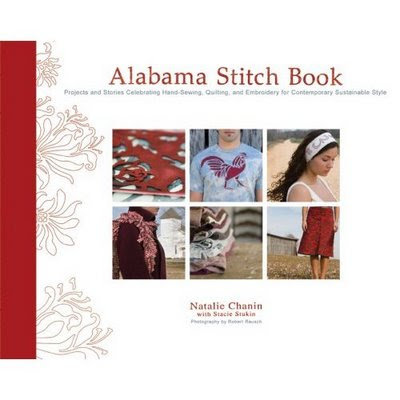 First, I have been somewhat obsessed with trying a reverse applique technique a la the Alabama Stitch Book. Have you guys checked out this book? Made any projects from it? I don't own it (yet), but have browsed it in Barnes & Noble many times.

Viv asked for hearts, so I figured I would overlay a black and white quilt block over a cut of red fabric, and reverse applique some hearts. I made a simple disappearing 9-patch block so that I would have a couple of large "frames" to work with. Mind you, this is the first time I've ever exposed any handwork (handiwork? what's the right word here?) to the world. 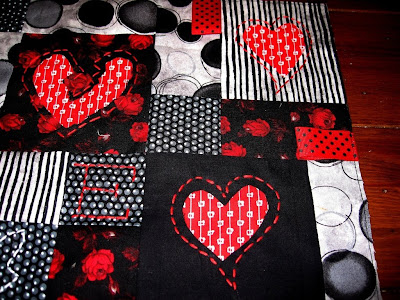 And once I started, I didn't stop! See Emily's initial in the small square above?

My research into Emily's world taught me about her super-cute pet cats. I was especially drawn to Miles, who is described as a "creative genius" and a "great improviser" ... but mostly because I think his little "x" eye is pretty bad-as*. So I took a stab at embroidering him on one of the blocks as well ... 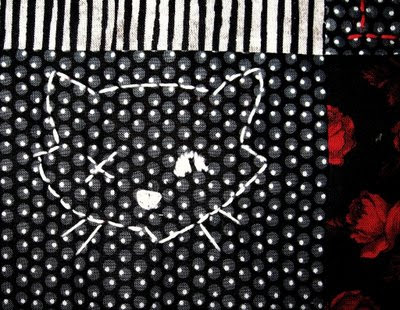 Can I brag on myself a little here? I didn't have a chalk pencil or anything to sketch Miles out on the black fabric first, so I tackled this freehand. Pretty brave, eh? ... especially since I was working with someone else's fabric! Not too shabby, I think ... apart from the slight misstep on his chin. Oh well, it gives him some character! 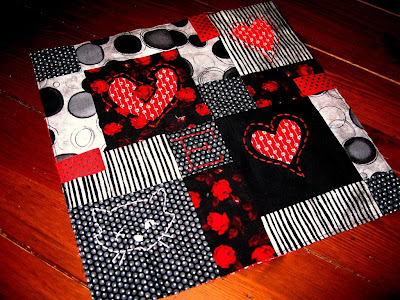 Here's the final block all put together. As you can see, I also added a few ribbon tags that should wedge themselves in the seam allowance when the quilt is assembled. Wow, I really can't wait to see how this one turns out. Follow along in the Cottage Quilting Bee pool! 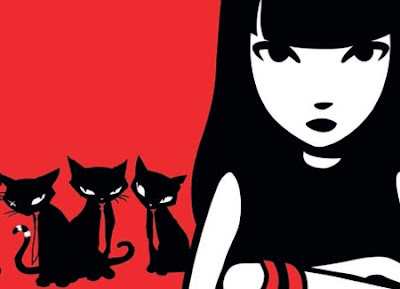