It's getting crazy around here. Work's crazy, life's crazy and, to top it all off, our home computer decided to die on us. Man, I hate Windows. Fortunately for me, I work at a tech company and I've got a few resident geeks taking a look at it for me. If nothing else, I am praying that they can rescue all of my family pictures and my 3000+ iTunes songs. As soon as they do, I'm off to the Apple store. Grrrrr ...

OK, enough of that.

February was a great month for both SewConnected groups. In SewConnected 1, Stefanie (aka artsymomma) sent out a truly inspired selection of solids and requested "modern", "linear" blocks. Let me tell you, the blocks that were made for Stef are A-M-A-Z-I-N-G. All of the already awesome quilters in the group really outdid themselves. Take a look at our Flickr page to see all of the modern goodness. (And pop over to Stef's blog to congratulate her on her newborn baby boy!) 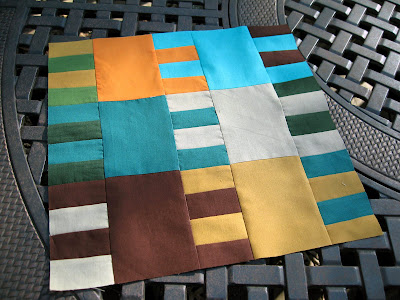 When I first became interested in quilting, one of the books that I picked up was the Modern Quilt Workshop, and one of my favorite quilts in that book is the "jigsaw puzzle" quilt (also featured on the cover). I decided to use that quilt as inspiration for Stefanie's block. I loved working with the solids and playing around with their placement. I can't wait to see her quilt after it's assembled! 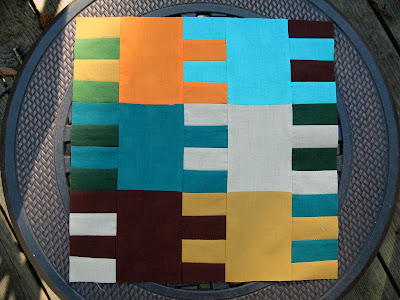 In the SewConnected 2 group, resident monkey Katy wanted traditional(-ish) blocks made from an array of Liberty fabrics (quite fitting for our UK-based member!) I received several different cuts of some of the most striking and original prints that I've ever seen, along with some plain linen for contrast.

I went very traditional with my first block -- a double windmill-type block highlighting my favorite fabric: the one with the horses (although it seems that I wasn't too successful in my fussy cutting -- I see more horse butts than I do heads!) 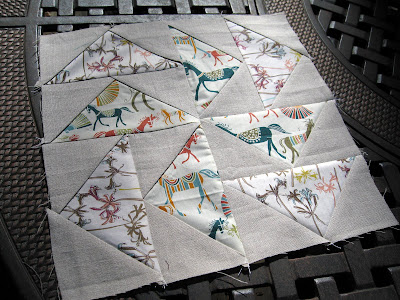 For my second block, I went somewhat less traditional with this block of my own design. Unfortunately, the pictures don't do the fabrics any justice. I love the flowers in blues and khakis, as well as the paisleys that I used around the edges. For contrast, I used a khaki-colored Kona solid. 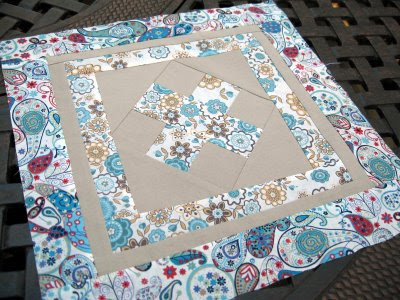 Umm, yeah ... so I couldn't just stop after 2 blocks. I had plenty of the horse fabric left and really wanted to make sure Katy would be able to feature them in her quilt. I know it's hard to see, but there is some rhyme and reason to this block: 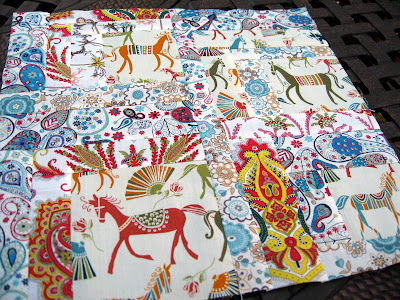 It's actually a pattern resembling four quarter-log cabin blocks. I know the pattern gets lost with all of the different prints going on, but I kind of like its craziness.

At this point I still wasn't out of fabric and couldn't resist starting a fourth. I didn't want a single scrap to go to waste! I decided to make another "X" block, but replacing the khaki with a solid pale blue (also Kona) that matched the blue of the Liberty fabric perfectly. 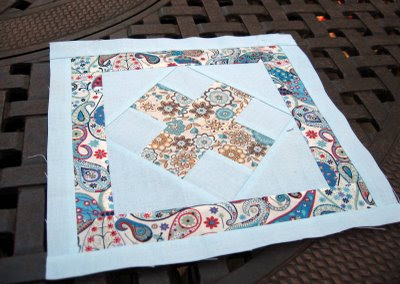 At this point, I actually did come up a bit short. If Katy likes this block (and I hope she does!), she'll need to add the final border from her stash.

Next month: SewConnected 3 gets off the ground!!
Posted by John at 4:35 PM