... my mojo, that is! If you remember, a few posts back I worried that I had lost it. Well, as soon as I got back from my trip to Boston that week, I got to work. I was starting to feel overwhelmed by the ever-growing pile of quilting bee fabric packets that were piling up, so I dove head-first into working on them. And it was just the boost that I needed!

First, in the Cottage Quilting Bee, Nettie from A Quilt is Nice sent a really great and eclectic grouping of fabrics including prints from some of my favorite lines: Lush, Flea Market Fancy, and Mendocino ... along with some coordinating solids and dots. She wanted improv-style blocks in a variety of sizes. I drew my inspiration from Scott's free Woodland Garden pattern that's posted on the Free Spirit site. I have plans to make this entire quilt, so this was a great test run. I decided to finish the block when I got to around 10" x 12" ... I love the rectangular shape. 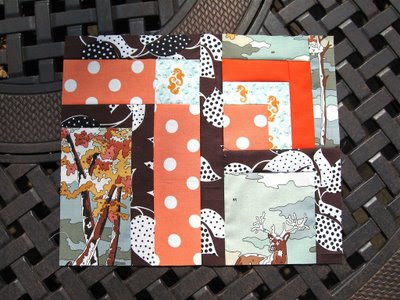 Next up is the block I made for Kathy in our Buzz Cuts group. I have to admit that I've developed a little bit of an obsession with string quilts. I think they're so cool, easy to make, and I love the effect. I think you'll be seeing some more of these from me in the near future ... 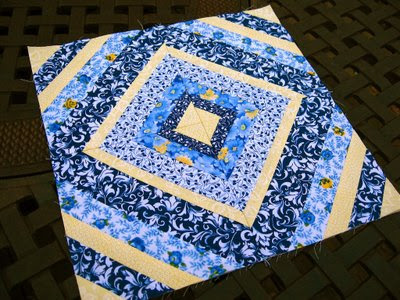 This next block is the block I made for Rachel from p.s. i quilt for the bee inspired group that she hosts, and there's a story behind this one. Rachel requested pinwheels and I was more than happy to oblige. I headed over to Quilter's Cache and started browing the block patterns over there. I came across a really sharp looking block called the Whirling Star and thought, "this is it!" It used a template which is a little outside of my comfort zone, but I really wanted to make something special for Rachel so I decided to go for it. Fast forward a few minutes later: I figured out my color and fabric placement, my pieces are all cut, and I start to assemble ... only to realize that the pattern calls for set-in seams.
Oh, cr*p.
I had never done them before. Actually, let me take that back ... I attempted them once -- that was a complete disaster and I wound up throwing all of the fabric away. Now here I am with someone else's fabric that I hacked to bits, and there was no turning back. I didn't have enough fabric to do anything else.
Long story short, I figured out the blasted set-in seams. It took a while, and I think I ripped out the stitches from the first quadrant three or four times before working it out in my head. I was pretty thrilled with how the block turned out. Take a look: 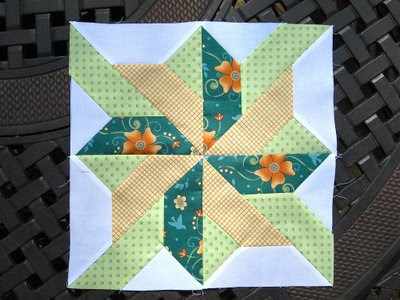 Audrey's block for SewConnected 2 was much more in my comfort zone. Audrey sent out a really great packet of red, aqua and green fabrics. She wanted blocks inspired by log cabin blocks, and I decided to separate the colors out into two different groupings and mix it up a little bit. I was definitely inspired by Rita's block from a few months back. To the original SewConnected group, Jessica of twinfibers sent out envelopes containing cuts from some of her favorite vintage sheets and pillowcases. I had seen several quilts and swaps going on using vintage sheets, but never had the pleasure of working with them myself. They were super-soft and the muted tones were very, very soothing. Jessica didn't have any specific requests except that we use a small floral piece that she included in each packet. I had a lot of fun free-piecing this one: 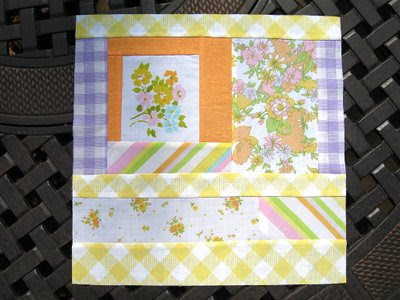 Finally, this was the inaugural month for SewConnected 3, another virtual quilting bee with a new group of 18 fabulous quilters. With so many people, this isthe first of the SewConnected groups that will have some months where we make blocks for two different people. March was one of those months.

These first blocks are for Saranya (sew-do-I) from Thailand. Her fabric selection was so inspiring that I couldn't stop at just one block! 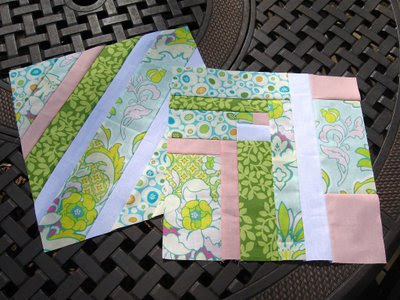 For this first block I once again turned to Scott's Woodland Wonderland pattern. That's where the part of the block to the left of the white bar comes from. To make it 12" square, I decided to feature the Heather Bailey "Pop Garden" flower on the right. 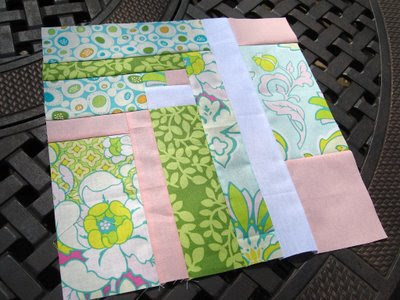 I used the basic principles of string blocks to make this 12" square featuring basic diaginal strips. I loved all of these fabrics so much that I really wanted to feature them and not cut them up into little pieces. I love this simplicity of this block. Saranya really chose wonderful fabrics. 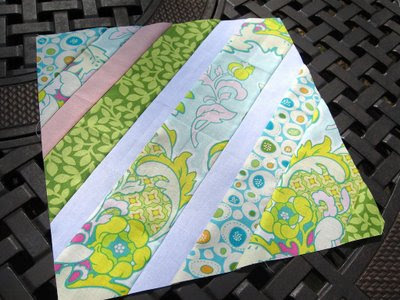 And last but not least, a block for Donna (rocklilly) from the Sydney, Australia. I know I sound like a broken record, but Donna too sent a very inspired grouping of fabrics. That's been my favorite part of joining these quilting bees (and why some might say I'm addicted): ogling over everyone else's unique but amazing fabric combinations and actually getting to work with selections that I might never have put together myself.

The idea for Donna's block really started with that chain-like piece down the left side. I've really been wanting to make something like that ever seeing similar patterns from Jacquie and others. I added the mermaids next because (and this may sound cheesy), it seemed to me that the chain could be an anchor chain dropping down from a boat, and the mermaids, turtles and octopi are swimming up and around the chain. Anyhow, I just free / improv - pieced the rest of the block from there. 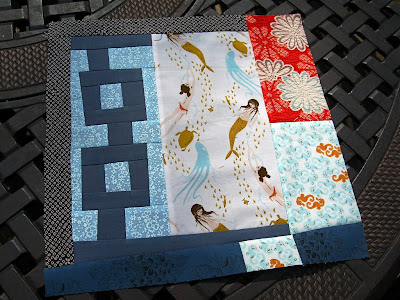 Whew! Enough for one post? I'm excited to report back next month because it's the first time that it will actually be my month in one of the quilting bees! I'm excited to see what I get from all of the other amazing quilters.