Tina of the Little Blue Cottage put out a call for people interested in participating in another virtual quilting bee a few weeks back. I've long been a fan of Tina's blog and couldn't resist, so I signed up for her new group aptly titled the Cottage Quilting Bee. I was very excited to see the group fill out with some familiar faces, some newer swap buddies, some bloggers whose work I've long admired, and some brand new-to-me quilters. It looks like it will be another great group and, judging from what's been posted so far, will produce some top-notch work.

First up for the month of February was Darci of Stitches & Scissors. She sent along a selection of scrappy pinks and greens and requested log cabin blocks. The best part? Darci was cool with us adding in additional fabrics as long as they coordinated with her theme and vision for the final quilt. I started pulling fabrics and, before long, had way too many for a single block. So, because self-editing and refinement are not my strong suits, I just decided to make two blocks rather than try to get it down to one.

For the first, a more traditional log cabin block with one of my favorite Tula Pink rabbits in the center. Darci sent the wonderful mushroom fabric (Alexander Henry, maybe?), the pink plaid, the white with pink and green circles, and the green with the mini white dots. Besides the bunny, I added the pink and green paisley, the raindrops across the top, some of my favorite Amy Butler dots, the green woodgrain, some strips, green florals and plaid, and some more Tula (dragonflies) across the bottom. SO cool! 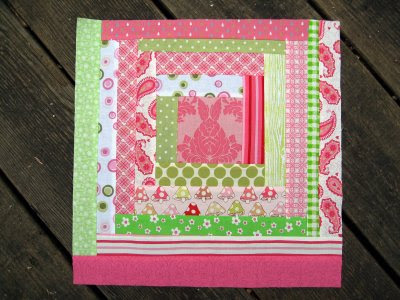 For the second block, I decided again to frame a critter in the center ... this time, a green dragonfly from Tula's Flutterby line. I gave this one more of a pattern, using the same fabric on the right and left, followed by another on top and bottom, and kept going with it. I especially love the bits of pink Ginger Blossom across the top and bottom (second row), and wish I had more room to leave more of the Heather Bailey jellybeans on the left and right. It's a thin strip and I'm afraid they're going to get lost when the block is connected to the others. 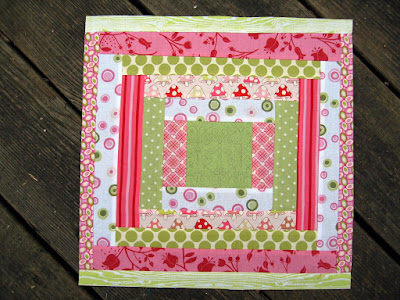 Looking forward to March already!!
Speaking of virtual quilting bees, I continue to get a lot of interest in the SewConnected groups, and especially in SewConnected 4 when it gets off of the ground. I'd love to have a fourth group sometime in the future; unfortunately, I don't think I'll be able to start it anytime soon.

That being said, if anyone is really itching to participate in a virtual quilting bee and might actually be interested in organizing one herself, I can personally deliver to you a list of names and email addresses of people who would want to play along. I'd love to see everyone who wants to be able to participate in one of these great groups ... so just let me know!
Posted by John at 6:00 AM