Speaking of virtual quilting bees, I was invited by the "Queen Bee" quiltinkimmie to join her newest venture, Buzz Cuts. Buzz Cuts has 16 members and February was the first month of the swap.

First up was themad1s, who was eager to have something made from her recently acquired stash of Heather Bailey fabrics. I was very excited to work with my selection from the Pop Garden & Bijoux lines, as I've admired these fabrics since they were released but haven't had the opportunity to make anything from them yet. I decided first on a string block, a design that I recently tried for the first time on a Crafster block and was thrilled with the results. I think the design works equally as well with these colors & patterns. 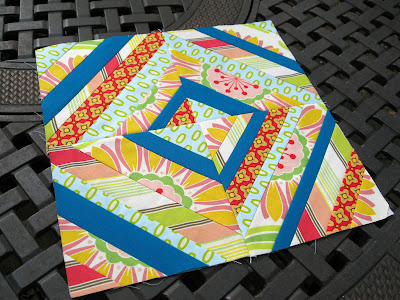 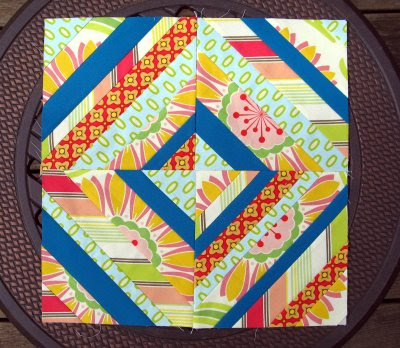 I had enough leftover material to make a bonus block, and thought through several different designs in my head before deciding on a simple block of framed wonky strips. The more blocks I make, the more I really enjoy making up my own block patterns rather than following more traditional ones ... although it all really depends on the fabrics. Actually, what I think I enjoy the most is really observing the fabrics that I'm working with and matching it with the appropriate design. 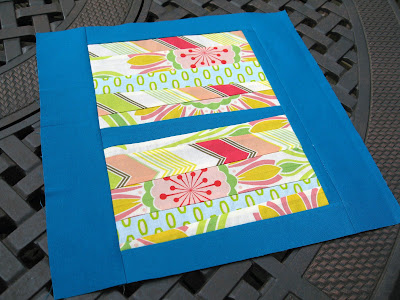 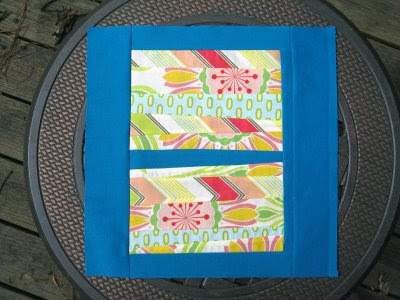 I'm pretty happy with how they both turned out. It's going to be a very, very cool quilt.

Belonging to a couple of different groups has been a lot of fun, especially as the personalities of the groups begin to emerge. Buzz Cuts is full of very eager, enthusiastic quilters. As soon as the fabric starting hitting members' mailboxes, the blocks were being posted at a fast & furious rate ... and most people made 2 or more blocks. In fact, I finished mine last week and I think I'm one of the last ones -- and the month's not even half over yet! I think all of the members are hungry for more ... I can just tell that people are already itching to receive March's fabrics.
Posted by John at 5:00 PM