September and October have been busy swap months for me, with several swaps all going on at once and multiple projects in varying stages of completion.

In September, I participated once again in the 6-12" Mini Quilt Swap. The theme for the month was "Owls & Mushrooms", and we could choose whichever we wanted to interpret. My problem was that I couldn't decide between the two. Luckily, neither could my partner, Beth (from Maddie and Me), so we jointly decided to swap one of each!

First up, here's the owl quilt I sent to Beth. I took the kids to a sing-a-long at Pottery Barn Kids and, lo and behold, there was an entire bed made up in owl-themed bedding. After deciding that I'd have to re-mortgage my house to outfit the twins' beds, I just picked up a single pillowcase to use in my quilt. I had never used non-quilting fabric before, but the sheet fabric was pretty easy to work with. And, as an added bonus, I realized when I got home that the colors were a near-perfect match with the new Amy Butler quilting solids. Since I knew I would be doing two quilts, I kept the pattern fairly simple. 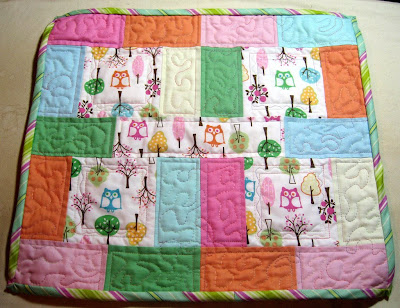 I also decided that September was the month to get over my fear of free motion quilting. So, after deciding on a spool of variegated thread (another first for me!), I dropped the feed dogs and went to town. Not too shabby for a first-timer, eh? 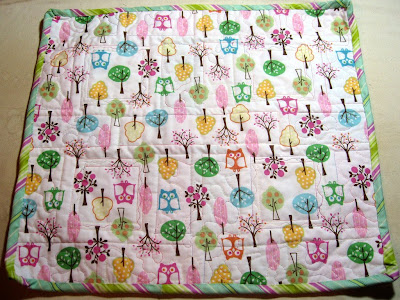 For the second quilt, I found this great matryoshka-and-mushroom fabric on sale at Superbuzzy. I stuck with a basic black-and-white top but added some cool red owl fabric (also from Superbuzzy) on the back and binding. 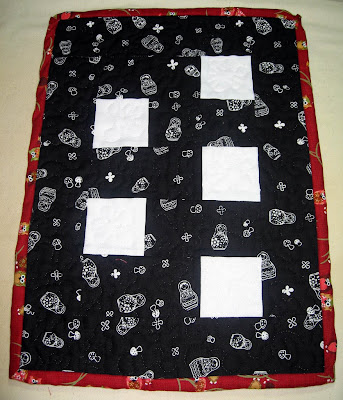 I also free-motion quilted this one, with black thread on the top and white thread in my bobbin. Then I used white thread to quilt little flower shaped in the white squares. 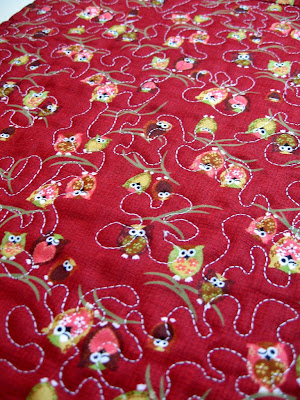 Together with some owl-themed goodies, the package was on its way to Texas! (This next picture is Beth's from her Flickr photostream, since I didn't take a picture of all of the goods before shipping it off). 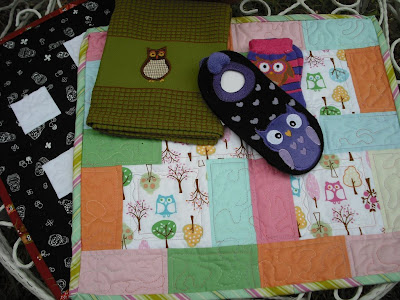 Now on to what I received from this swap! I got two amazing little quilts, and some added goodies too. One of the biggest problems I've had with participating in these swaps is that I never feel like what I send can hold a candle to what I receive, and then I feel bad for my partner. Take a look at what Beth sent and you'll see why ... 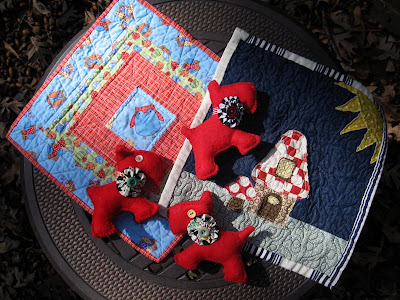 Isn't this such a great little package to receive? The three little Scotties were quickly claimed by my kids, and I had to remove them from the kids' beds (where they've been sleeping every night since receiving the package) to take this picture!

First up is Beth's take on an owl-themed quilt: 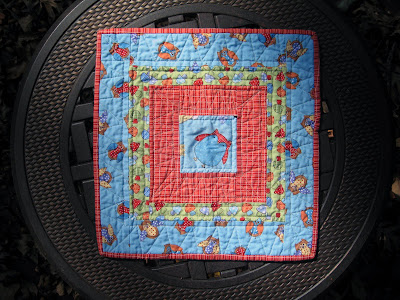 Great colors, wonderful craftsmanship on the quilting and binding, and some really cute fabric to boot.

And here's my mushroom quilt: 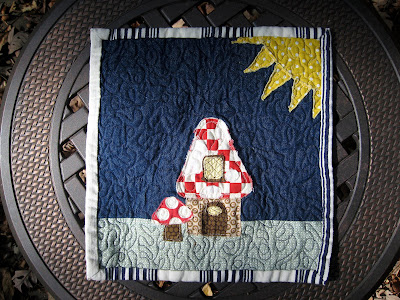 Some really great raw-edge applique on the sun and mushrooms. Kind of reminds me of a little Smurf house! Both of these quilts are super-soft and will be treasured.

The 6-12" Mini Quilt Swap theme was "Out of the Box", which meant that you could make whatever you wanted as long as it wasn't the traditional square- or rectangle-shaped quilt. And over at Swap 'Til You Drop, October meant Halloween-themed quilts for all. You may remember the beauty I received from Carol as part of this swap.

So in the name of efficiency (and after checking my partners' preferences to make sure it was OK to do so), I decided to make two different "Halloween Out of the Box" quilts: These were way outside of the box for me and different than anything I've done before. I used fusible interfacing to create and attach the shapes and some fancy machine stitches around them for detail. Then I free-motion quilted in the black space.

First up, my quilt for Carol in Swap 'Til You Drop: 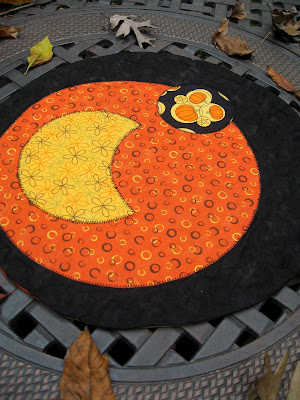 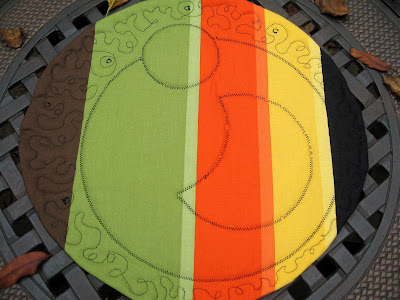 And next, a slight variation in placement for Tanaya (themad1s on Flickr) in the 6-12" Swap: 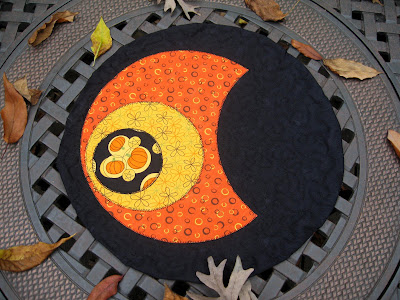 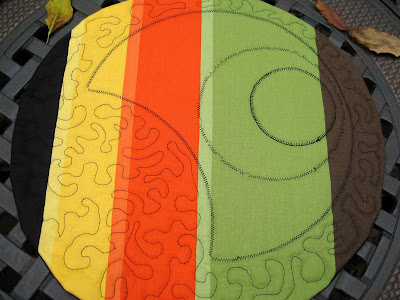 Neither is perfect, but I was fairly pleased with how my idea was executed.

And finally, here is what Tanaya sent for "Out of the Box" month: 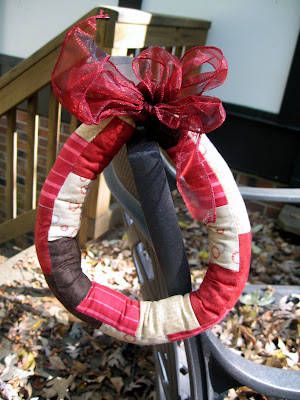 A fabric wreath! Isn't it great? And very season-appropriate, too. My wife quickly snatched it and hung it up in the kitchen. Tanaya also sent some fabric, ribbon, and chocolate ... although some of the chocolate seems to have disappeared between the box being opened and the picture being taken! As always, I am awed by the creativity, craftsmanship, and generosity of online swappers. Big thanks to my partners, all of the hostesses, and everyone that puts so much thought, time and effort into their creations for relative strangers and keeps these swaps as strong and as special as they are.

I've got a few more swaps quilts still in process (ALQS2, Holiday Booty Swap, and DQS5), which should keep me busy through Thanksgiving ... then I think I'll take a short swap hiatus to focus on my family for the holidays.
Posted by John at 4:41 PM