If you've been following along, you know that we've decided to get a Golden Doodle and have been deciding between two puppies from the same litter (we'll call them Blue Ribbon and Green Ribbon). There are other puppies in the litter, but we were under the impression that all of the others had been chosen and that we'd get to pick between Blue and Green this weekend.

Well, the people in front of us actually hadn't decided on one of the other puppies, and selected Green Ribbon instead. Which opened the door for us to actually get our first choice all along.

Please allow me to introduce Orange Ribbon ... or, as he will be known from this point on, Clancy! 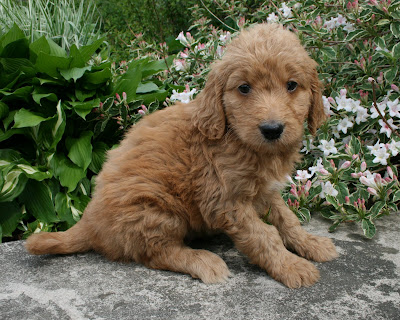 You can see that he is more orange / brown colored than the other two, which were both much lighter in color.

Email ThisBlogThis!Share to TwitterShare to FacebookShare to Pinterest
Labels: pup