I'm really excited that AmandaJean has started her second quilt-a-long. I found her blog about midway through the first quilt-a-long, and wished I had taken the time to catch up and play along. Nevertheless, I followed each week as the new block was posted, visualizing the making of it in my head, but never actually started. As soon as she said there would be a round 2, I knew I would want to take part. And now, round 2 is beginning! 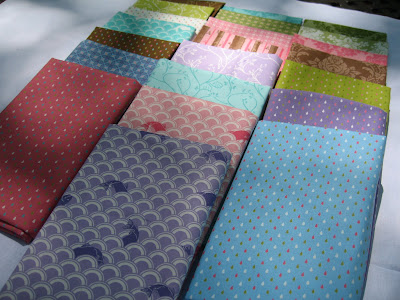 Inspired by Anina, I decided to use Full Moon Forest fabrics (designed by the fabulous Ms. Tula Pink who, by the way, reads my blog, thankyouverymuch!!!).

I love the colors of these fabrics and think they'll look great against a white background.

My (probably overly ambitious) plan is this:
Each week, I will make that week's block from both Quilt-a-Long I and Quilt-a-Long II. That way, at the end, I will either have two quilt tops, or I can combine all of the blocks from both rounds into one quilt top ... if it looks OK, of course. You see, this second round happens to have 12 setting blocks, which I think I will try to replace with the 12 blocks from last round (since the blocks from both rounds finish at 12.5").

That probably sounds more complicated than it needs to be, but I'll just cross that bridge when I get to it.

Think I can handle two blocks per week?