So after completing my first quilt, I was eager to move on to the next project. The problem was, I wasn't sure how to do anything else ... so I promptly started another Brick Path quilt (I know, original, huh?).
I was still new to all the different fabric collections, but I found one I really loved called Mendhi by Free Spirit Fabrics. The problem was, as soon as I found it, I also learned that it had been discontinued and there were limited amounts to be found. Luckily, our local shop still had most of the colors and patterns left so I picked up a bunch of 1/2 yard cuts. And because I didn't know what else to do with them, I started cutting more bricks. 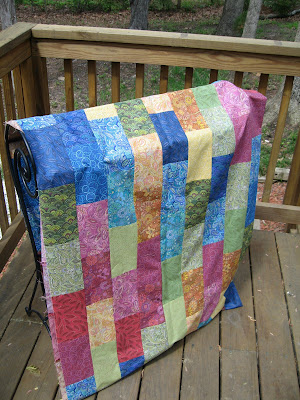 In retrospect, I guess this one went together more easily than my first. It's been in progress for a long time, though ... it survived a move across the state and I only just recently finished piecing the top. Backing is pieced and ready to go, too. Now I just have to baste & bind it.
Not sure if it will show up, but here's the green that will be used for the back: 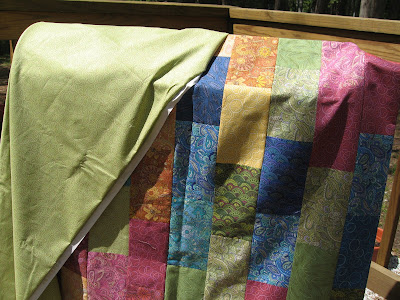 I made a HUGE rookie error when piecing this quilt. I painstakingly and methodically laid out every single individual brick on our living room floor one day, just to make sure I liked the distribution of color. Well, see if you can follow me here: when I had all of the columns pieced and was ready to put them all together, I laid column 1 on top of column 2, and instead of sewing along the left side (which was the seam that was supposed to be in the middle), I mistakenly sewed up the right side. And I did it again and again, until I had a bunch of sets of 2 columns put together. Then I continued to make the same mistake while putting the whole top together. The result had a lot more of like colors touching than was my original goal. But it certainly didn't bother me enough to rip it all out. I'll just pretend it was random placement!

This is really beautiful fabric; it's a shame it was discontinued so soon. I still have a TON of it left, but I'm not rushing to use it this time. The right thing will come along ...