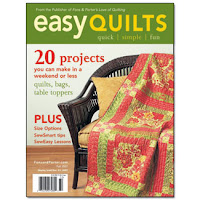 Two brick path quilts was enough. I was eager to try something new, and had picked up a copy of the first Easy Quilts magazine a few months earlier. I really liked a lot of the projects in that magazine (and the ones that have followed), and I'm looking forward to turning to them often for new project ideas.

The pattern that really drew me in to that first issue was called "Flip a Coin". The magazine insisted it was an easy pattern, but it sure didn't look easy to me. So I mulled it over for a few months, reading the pattern over and over again, working through it in my mind and all the while softly convincing myself that I could do it.
I decided to use some Amy Butler "Lotus" fabric that I had purchased without having a real plan for it. One of the fabrics had a large pattern on it which I thought would work perfectly for the long strips that make up the main part of the quilt. Plus, the pattern called for a stripe, and I just so happened to also have the coordinating stripe.
Here's the top: 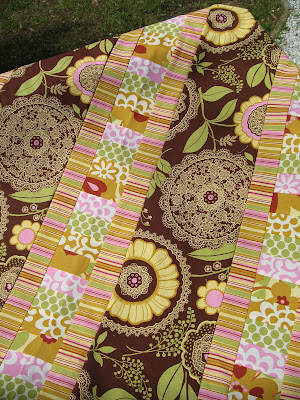 And here it is with the dotted fabric that will become the back: 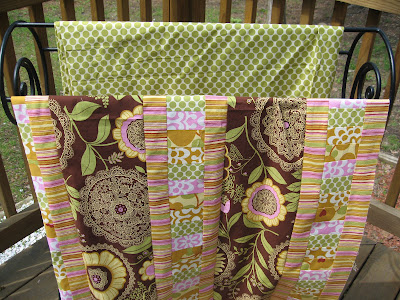 I am happy to report that it was pretty easy to put this one together. I can see myself making more of these -- I think with the right fabrics, it really 'sings'. We're actually thinking of giving this one as a wedding gift to a cousin who will be married in July ... provided the final product turns out OK after the quilting and binding, of course. The mag called for stitching in the ditch on either side of the striped sections, quilting some X's in the 'coin' section, and a cable-knit design up the large columns.

I think it will be tough to give this one away. Actually, I think the tough part will be prying it out of my wife's fingers ... she really loves it ...